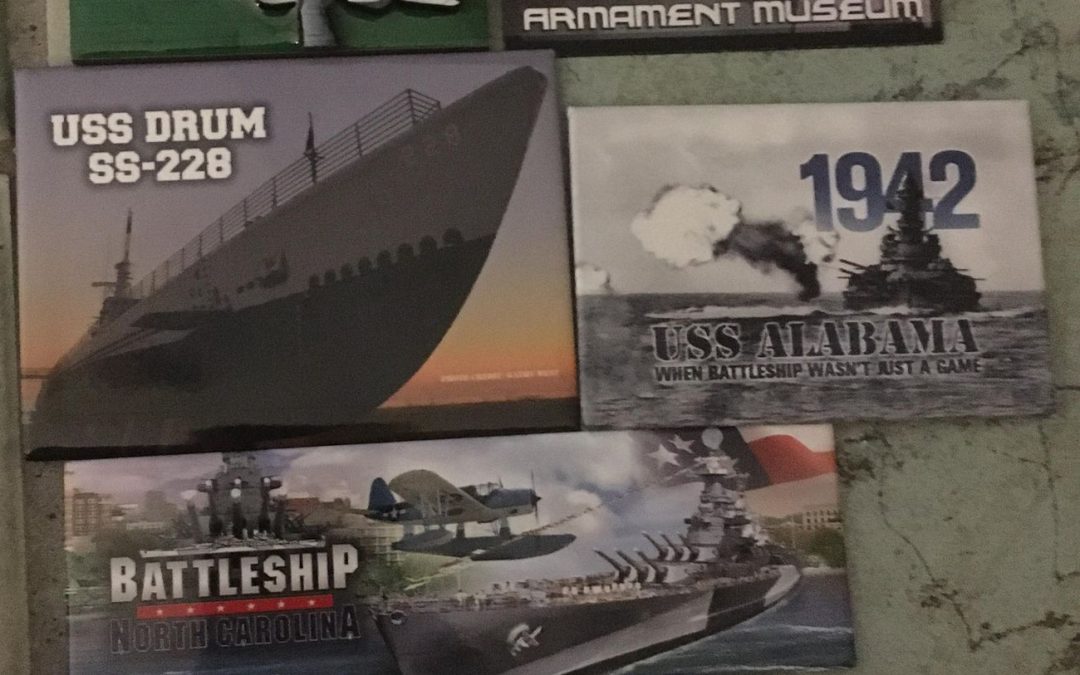 Sorry it’s been a bit. Seems like just a blink of the eye I was talking about The Strategic Air Campaign and getting ready to go on a jaunt across the South to visit warship museums. Well the jaunt happened: 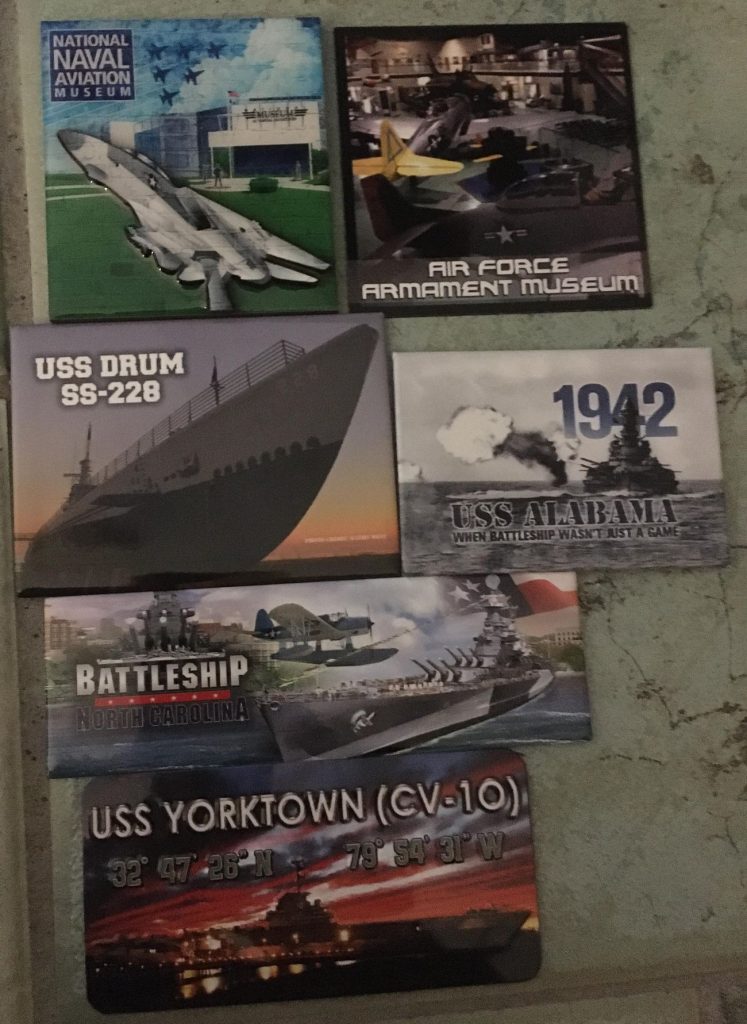 We don’t just sell fridge magnets…we buy them too!

These are all the museums I visited from 30 May – 7 June 2021. I plan on doing a blog post on each one over the next few weeks, but figured I’d cover some of the ancillary stuff before I got into the museum “meat.” Or put another way, here are some things I learned the hard way while on my trip so you don’t have to:

I had originally planned on leaving in early May, but the gas pipeline shutdown in North Carolina nixed that plan. I mean, the last thing one wants to do is spend a whole bunch of time and effort waiting on gasoline while on vacation. Well good reader, I’m here to tell you–that was a costly delay. If you’re planning on taking a trip through the South, go before Memorial Day. Otherwise, you will pay about 1.5-2x more for scarce hotel rooms if your route takes you, say, from the U.S.S. Alabama down Interstate 10 then around the Atlantic Coast. Thankfully I have a hotel chain membership, or otherwise this would have been very, very expensive.

As far as route goes, I strongly recommend west to east rather than east to west. I started off in KS, cut across MO, then down south to Maxwell AFB for some Cold War research. It was good driving and not at all busy despite being the tail end of a holiday weekend. Cutting down to Mobile (U.S.S. Alabama) then to Pensacola (more research at the Naval Aviation Museum) was fairly straightforward and, again, very easy driving even with Gulf beach traffic. I made sure to get a photo op going into Florida, but apparently should have made sure to sample the orange juice there at the visitor center. 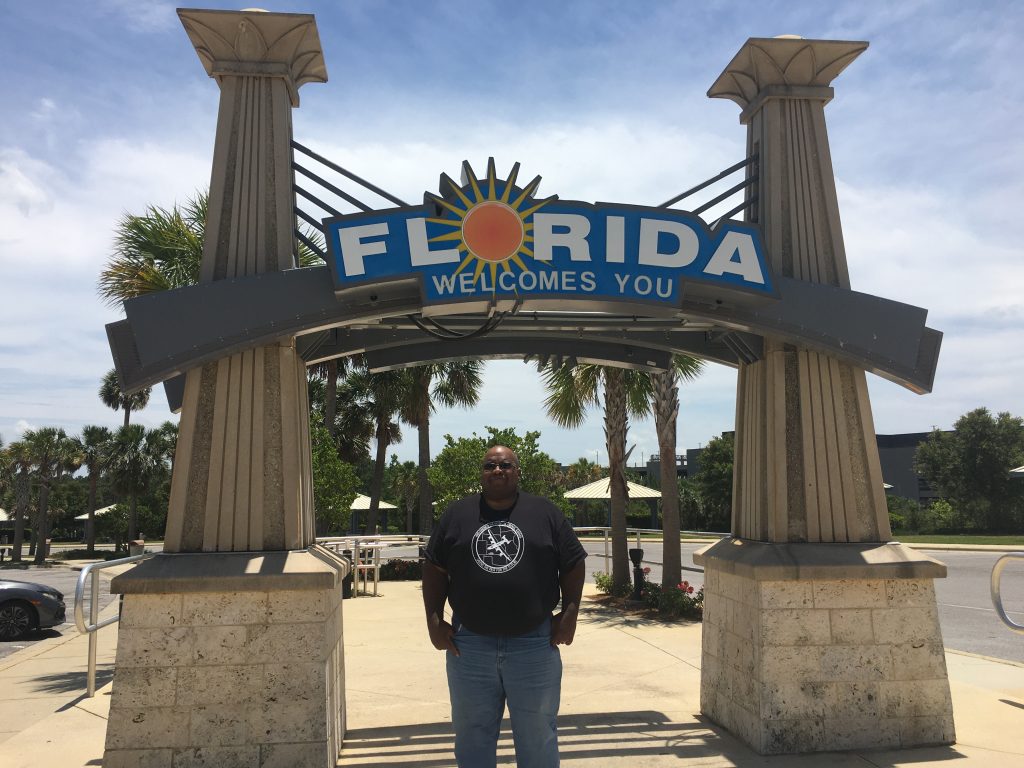 Thank you, random Star Wars fan who helped me!

After spending the night in Pensacola, I headed on over to Eglin AFB for the USAF Armament Museum. Just missed author KR Paul while in Florida. Hopefully the stars will align in the future for an in person meet and greet, as I now want to know more about cave diving. Then it was across Florida and into Georgia. Fun fact–the other part about going this time of year is it is storm season. Second fun fact? Even if both your headlights are working when you leave Pensacola, both may burn out over the course of an eight hour drive. This is not, shall we say, fun to find out in Savannah, Georgia. However, if you own a Toyota, I can recommend Stokes Toyota of Hilton Head without hesitation if you’re in the area. Helpful staff, did the research to find out what was wrong with my vehicle (pro tip: RAV 4s don’t have hi / lo bulbs, but use a mechanical shutter to perform the switching function), and got me out of there 3 hours ahead of when they thought I’d be done. Then it was off to the first of two warship museums in the Carolinas.

Hamilton Spoke About This Place…

Getting to the U.S.S. Yorktown after my impromptu maintenance stop was kind of interesting. If you have the time, I recommend hopping off the beaten path and coming up the state highways like I did. Scenic drive, plus you’ll spit out almost right on top of the carrier. Otherwise, if you come from the interstate, you’ll have a couple extra turns to make. This can be bad, as if you make a wrong turn (as I did leaving the carrier thanks to construction), good luck getting back on the correct route.

Rush hour traffic coming out of the Yorktown was pretty bad, so schedule your timing accordingly. Also, unlike the Gulf Coast, beach traffic was a particular pain through most of the drive. Despite this, the scenery for South into North Carolina was wonderful during the early summer. Overall, if you are going from the Yorktown to the North Carolina, best to A. break up the trip into two days even though you might think you can do it in one and B. swing inland early to find affordable lodging (more on that later). Also, understand that you’re probably going to have to backtrack at least part of your trip unless you’re planning on continuing north up through Raleigh. I originally planned to do that, but various factors (to include a very sick cat) kinda persuaded me to start heading back rather than visiting friends.

Getting Home: Through the Mountains

Coming back west from the east coast I had a few options. Looking at the map, I decided to head for Charlotte, NC then across to Knoxville, TN. Mostly this was based on what construction I knew was going on and the opportunity to choose either I-64 or I-70 for getting back home to KS. I can now say, if you’re doing this trip in winter? Find another route. It was interesting enough of a drive in summer, rainy conditions. I cannot imagine what that trip would have been like with any sort of winter precipitation on the ground. (Oh wait, I don’t have to imagine anymore.)

After hitting Knoxville, I cut up to Louisville in order to say hello to good friend and audiobook narrator Jennifer Araya (Aries Red Sky). To say this drive was an adventure would be an understatement. As with the first leg of the route back, I’m not saying there’s no way I’d do this with ice potentially in the offing…but I’d need a really good reason (read: “once in a lifetime” event) to do so. Also, definitely get gas before you enter this stretch. Getting on and off the highways wasn’t fun, and this is not someplace you want to be on fumes.

Louisville to St. Louis was pretty straightforward. As always, I tried to make sure I skipped St. Louis during rush hour. Met up with children’s authors Jennifer Stolzer and Jessica Matthews for lunch. Which, if you’re ever in St. Louis, I recommend this calzone place. Definitely left there happy and full.

After the food break (which went long because we hadn’t seen each other in over a year!), it was back on the road. About the only weirdness on I-70 was, once again, Missouri Department of Transportation fixing bridges. That’s happened often enough it’s probably worth a check on this website. From prior experience, I can tell you that there is _always_ a bypass if you’re okay with 2-lane roads.

All in all, I’m glad I went. In a world of infinite resources, I’d probably do it again through the NE to hit the Massachusetts, New Jersey, Intrepid (again–I went in 1994) and Wisconsin. This would have the bonus of the US Air Force Museum being on the way as well. I mean, Big Mamie does have a bit of a history…and I hear she’s a great warship museum. No, Bad James, bad. I got more than enough from my Southern iteration for non-fiction and fiction. Yes, there’s always room for more knowledge…but I’ve got books to finish. 🙂

Speaking of books–I’m now selling signed copies of the books and art print via Square. If you want to “cut out the middle man” and buy directly from me, the Square site is here. If you’d like another way to support me, shopping through my Amazon affiliate link puts a little scratch in my pocket at no additional cost to you. Thanks in advance for either help