The Hammer Slams No More (David Drake Is Retiring) 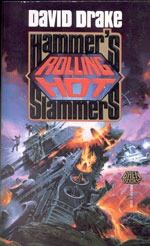 There will be a longer post later. However, as many of you are fellow military sci-fi fans, I thought I’d share the news that David Drake is officially retiring. Mr. Drake has been talking about his declining health for several months, and I am unfortunately unsurprised. I can’t say for certain how long I’ve been reading Mr. Drake’s works. I can tell you, however, what the first one was:

Not the first time I stepped into a universe midstream. Thankfully, the Hammer’s Slammers’  universe lends itself well to jumping back and forth between novels and short story collections. I don’t think it’s a secret (given my background) that I’m a fan of armored warfare. Alois Hammer and the gang have provided me with hours of entertainment over the years, and I am sad that there will be no more novels.

Even more than the forced end of a universe, I will miss hearing Mr. Drake speak as a person. I have had the great pleasure of seeing him at Libertycon several times. Every time I learned something new, on topics as widespread as ancient human culture to different theories of space travel. To have a man so cosmopolitan and well-learned stricken with mental maladies seems particularly cruel. I’m told that Mr. Drake is still, for now, receiving emails and messages. I encourage folks to drop him a line. One misfortune of growing older is getting to see the titans of your youth fade away. I’ll be hearing Mr. Drake’s receding footsteps (and the whine of turbofans) for decades to come.