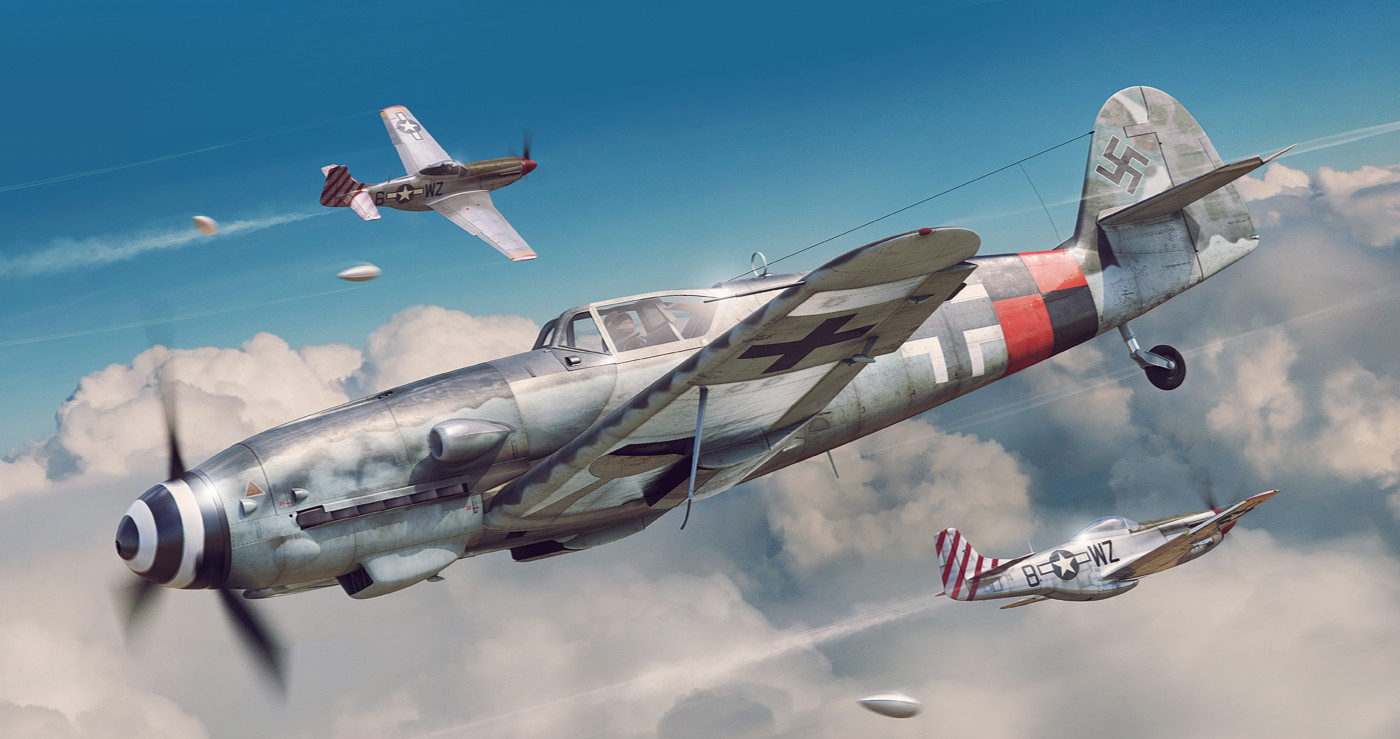 This is a continuation of Strategic Bombing Part IV

As bad as the pilot differential was, Adolf Galland might have still been able to cobble together a defense even with tired airframes and exhausted pilots.  That is, Galland might have been able to do it if Germany’s numerous strategic miscues hadn’t come home to roost with a vengeance. As can be imagined by the discussion about 10,000 biplanes in my last post, the Nazi leadership had been completely unable to fathom just how utterly pissed off the American people were in 1941. Having Japan decide “Sunday Morning Banzai” was the best way to tag Uncle Sam into the conflict wasn’t their decision, but boy did they double down on stupid by declaring war. 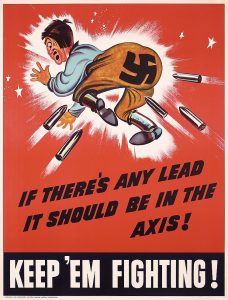 I mean, look where the bullets are aimed.

Adolf Hitler had no idea what a shrewdly prepared industrial machine looked like. Perhaps because he’d seen Nazi Germany’s Byzantine, back-stabbing, barnyard fornication of an excuse for war production, perhaps because he was a walking example of the Peter Principle, Hitler had scoffed at President Roosevelt’s goal of 10,000 airplanes a month. Unfortunately for Germany in general and Adolf Galland in particular, President Roosevelt had been anything but joking when he’d demanded that number of aircraft. U.S. War Production in World War II would require a book (or two) in and of itself, and no one’s got time for that. Let’s just say there are advantages to being able to literally click on the lights and run things 24-7-365.  This includes straight up turning a car manufacturer into an airframe manufacturer that could churn out some of the most complicated machines of the period.  To put this in perspective, this would be like Chrysler going from manufacturing trucks right now to B-1 bombers by next November, then making dozens of Bones appear a day by June 2022. Nor was Ford the only automotive concern that suddenly got into the airplane business, as General Motors also began turning out warplanes (albeit mostly naval airframes). Backed by the United States’ populace’s willingness to sacrifice and the decision that everybody  was going to play a role of some sort, Roosevelt’s focus on aircraft finally began to pay dividends in late 1943.

The above is not to suggest the process was seamless.  The U.S. never quite sustained the “10,000 aircraft a month” goal with regards to combat airframes, yet was definitely cooking on all industrial cylinders. However, a simple statistic will tell the tale of just how utterly screwed the Germans were starting to get. In 1943, the Germans produced a grand total of 10,898 fighters. They would produce another 26,326 in 1944, with the majority of these being in the back half of the year once Albert Speer got some people’s minds right. In contrast, the United States alone produced 23,988 and 38,873 fighters, then added an additional 29,355 and 35,003 bombers respectively.  Yes, not all those aircraft went to Europe (*cue video montage of Japanese pilot being tossed through this rhetorical frame with two black eyes and a bleeding nose*). As a counter to that argument, there’s also that little matter of over 100,000 British and Soviet aircraft also taking part in operations. Like a bully’s associates when it’s time to collect lunch money, the RAF and Red Air Force were more than keeping additional pressure on the Jagdwaffe with plenty of their own punching and kicking, so the 40% or so of American aircraft heading to the Pacific were a wash.

America’s ability to produce ancillary equipment (drop tanks, oxygen tanks, machine guns, etc.) in huge numbers was almost as critical as the ability to generate airframes. For instance, 8th Air Force squadrons had entire supply dumps filled with spare parts up to and including entire end items. Groups that returned with damaged aircraft usually had replacements on hand within 24-48 hours, with the original aircraft being sent to regional depots for repair. Tired airframes were either replaced by planes of the same type or, increasingly, newer models (e.g., P-47Ds with P-47D-25s).   Said newer models had improvements (e.g., illuminated gunsights, water injection, better propellers, power-boosted controls, etc.) that gave them marked advantages, plus field modifications that took advantage of recent combat experience from both theaters. Meanwhile, on the German side, Jagdwaffe machinists were having to make do with salvaged parts and getting material of dubious quality thanks to the Nazi regime’s overreliance on slave labor. While variance in mechanical tolerances existed on both sides, with often fatal consequences for pilots, by early 1944 things were getting ludicrous for Fw-190 and Bf-109 aircrew. (This discussion of engine manifold pressure tolerances is instructive).

With these advantages, it should be unsurprising that American squadrons, unlike their German counterparts, actually matched their paper strength.  As for the numbers of these squadrons, the 8th Air Force alone began fielding 2-3 times the squadrons of Jagdwaffe Gruppen stationed in the West by January 1933.  Said German fighters also were forced to contend with, as mentioned above, the RAF and, beginning in May 1944, the 9th Air Force. This numerical differential was one part of the recipe for the absolute doom that was about to befall the Jagdwaffe. Effective interception was predicated on German ground controllers having the ability to mass units at a critical point. Many of these units, due to the pilot training problems, were already “brittle” by the end of 1943. Thus, if they lost 1-2 pilots, especially old hands, coupled by accompanying loss of aircraft? Well, things could start to snowball quick.

“Man, this is going to stop so many horses…”

Another ingredient in that particular dish was the reason behind this post’s title: German leadership at all levels could not conceive of the speed or breadth of Allied technical advances. Apparently, German intelligence was well aware the Americans were about to field a fighter that just might have the range to penetrate to Berlin. Famed aircraft designer Willi Messerschmitt, father of the Bf-109, allegedly replied, “That’s utter nonsense.  Such an aircraft would have to be big as a barn door.” Legend has it that Messerschmitt and Adolf Galland were at a test facility just west of Berlin in spring 1944. Upon having a flight of P-51 Mustangs show up over a test field and proceed to shoot up the place, both men took shelter in a slit trench. After a particular close strafing run,  Adolf Galland allegedly turned to Willi and sarcastically remarked, “Those are some particular fine barn doors over our heads.”

Whether or not this is apocryphal, it highlights just what the P-51 Mustang represented. Although not the end all be all of piston fighters that it’s often portrayed as, the Mustang was a prime example of Allied ingenuity. Continuing on a theme, the Mustang is a book (or 20) in and of itself. Thus, this post will back up a bit from Adolf and Willi hanging out in a slit trench and just hit the highlights. The P-51 started off as a British contract that became an American attack aircraft (the A-36). Destined for the dustbin of mediocrity, some British and North American Aircraft engineers basically said, “Hey, let’s put a Merlin engine in that thing.” A ridiculously short amount of testing later, the Mustang in its most famous iteration was born in mid-1943. Shortly thereafter, the Army Air Force also realized if it put a pair of massive drop tanks on the airframe, the resultant fighter had extremely long range. As in, enough range to escort B-17s to Berlin, fight German interceptors to a standstill, then return to England. (Note: It’s amazing the experimentation one can do when there’s an entire continental land mass over which to conduct flight tests. This is another understated advantage that often doesn’t make the history books. Or put another way, there’s not a lot of wholly uncontested airspace for the Luftwafee to conduct experiments in 1943, and certainly not thousands of miles of it.)

At this point the Luftwaffe was suddenly in deep trouble. Although both of its main fighters had little difficulty with the P-38 at altitude and could simply wait for the P-47 to run out of gas, the Mustang was an altogether different monster. It was faster than most models of the Fw 190 and Me-109 at high altitude. Its battery of 4 (later six) .50-caliber machine guns was lethal enough to see off most opponents. While the Mustang‘s in-line engine was vulnerable to battle damage due to its glycol coolant, its airframe was surprisingly strong. Moreover, every Mustang was “fresh off the factory floor,” whereas many of Reich’s fighters (and their engines) had seen a lot of hours. Rushing the P-51B into production, then to the 8th Air Force, the USAAF finally had enough airframes by February 1944 to equip a handful of groups to include the highly experienced 4th Fighter Group. Despite having first fought the Mustang in December 1943, the Jagdwaffe was not prepared for what was about to unfold. Only one more component needed to click into place: Badasses.

Notes: Featured image is from Piotr Forkasiewicz.  Please go check his amazing work out.  Sourcing is from the numerous books found in my historiographical paper. If you’re a World War II buff and also like alternative history, check out my Usurper’s War series on Amazon.