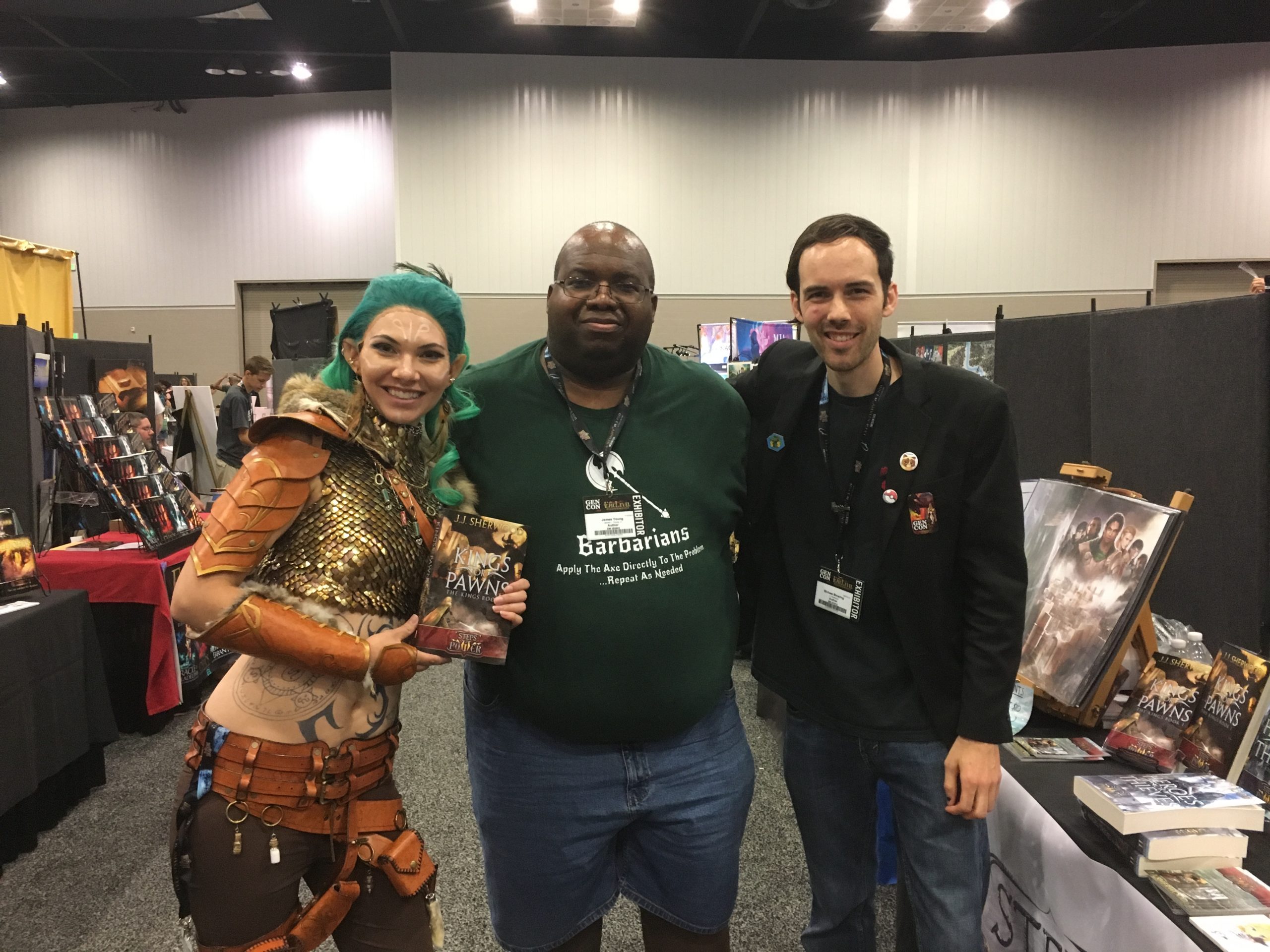 GENCON.
Man.
Part of the reason I’ve taken so long to do this AAR is that I was having trouble trying to put the experience into words.  It’s been two weeks since I loaded out of Indianapolis and began the long trip home…and I still find myself having a goofy smile for no good reason.  If you crossed Toad the Wet Sprocket’s Walk on the Ocean with some goth synth metal fantasy power ballad all over a rolling dice track, that would probably be what my homage to “The Best Four Days in Gaming” would probably be.  Which is ironic, because I didn’t do a whole lot (read none) of gaming.
So what was so great about it? More on that later.
TL:DR for those here for the “Go or not go…” from the author’s perspective:  That hall is wait listed for a reason, and I did great fiscal murder there.  With only books, my books, as in I couldn’t even take any anthologies there.  No prints either.  So, if you want a chance to hand out your swag at a con that has (conservatively) to 75,000 rabid gamers and can get into the author alley, go.
NOTE: I was wait listed and got into Author’s Alley late.
I will add this caveat, however:  Lodging is going to eat you alive.  If you are comfortable with Air BnB, several vendors had success with that.  However, if you’re not comfortable with Air BnB, expect to spend upwards of $600 on lodging, and that’s if you don’t stay downtown.  Which, for the love of God, stay downtown if you can.  Technically, according to the hotel I was staying at and Mapquest, it should have taken 25 minutes to get downtown.  Yeaaah, that’s not counting weekday rush hour my friends.  Time is money, and in this case it’s worth that extra $10-$15 a night to be able to walk back to your hotel if necessary.
The tables in Author’s Alley were your standard 6-foot con table.  As originally set up, the grey walls behind were angled in order to make them slightly more stable.  This…this was a problem, as it sharply constricted the back area space, meaning I had to empty two of my book crates: 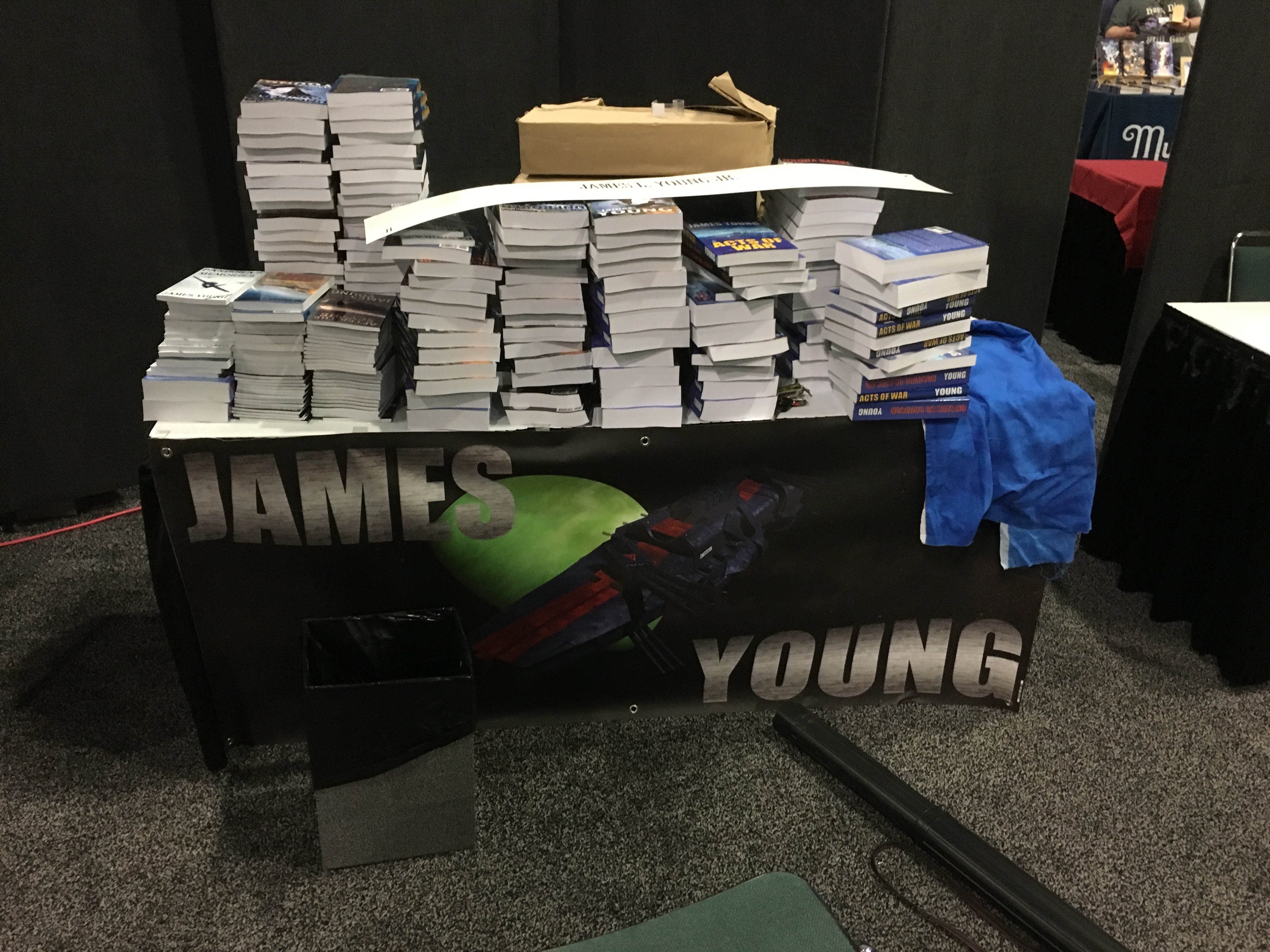 “I think we’re going to need a bigger booth…”

Despite the booth shock, load in (and load out) went really well.  This was a con that took security seriously, and woe be unto you as a vendor or help if you did not have your badge during setup.  Park in Parking Lot A if you go–it’s not that much further than the “Marshalling Yard” behind the building, and you won’t have to wait for a pass to park.

The crowd, as to be expected from the gaming community, was mostly (high and epic) fantasy fans, then about 75% of those sci-fi as well.  The Butcher’s Blade print, as always, was a life saver.  As my neighbors all observed, it made people stop and look, I could engage them in conversation, and at that point the magic usually happened.  Again, if only I had apparently talked to the right person and been told “book related merchandise” was safe to sell.
Speaking of fantasy, it also helped that I had great neighbors.  To my right was fellow sci-fi author Hans Cummings: 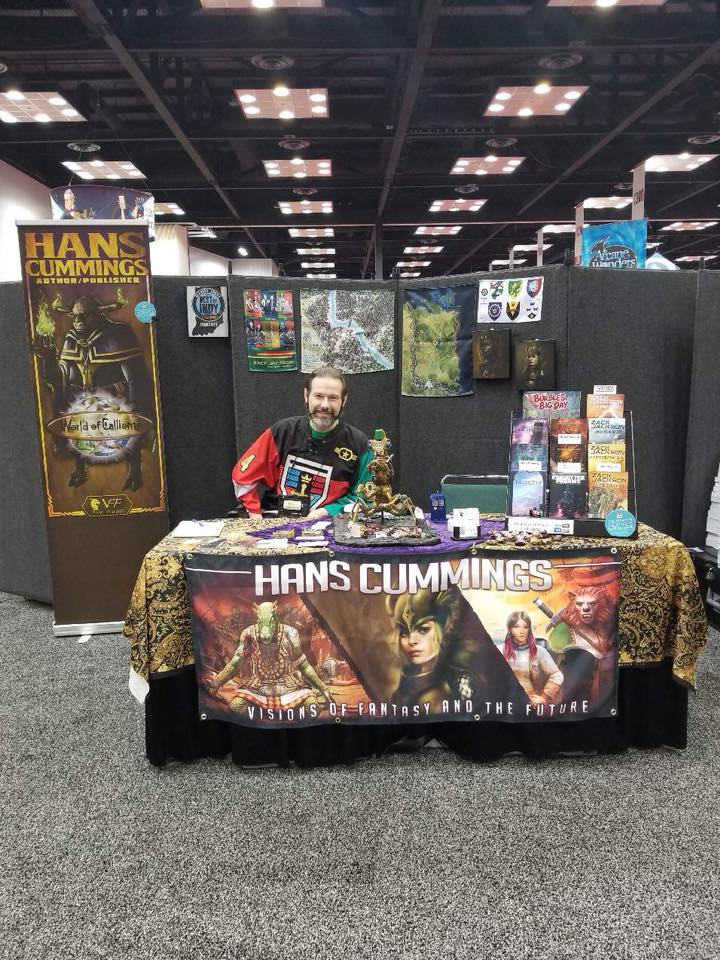 To my left was Fantasy Author J.J. Sherwood (here with your humble host and her hubs, Michael):

Good neighbors make any Con go well, and J.J. and Hans were awesome.  Since J.J. did not do sci-fi, she sent folks over to me.  As I lacked fantasy, I sent folks over to her.  It went really well.
So, again, if you have a chance to do GENCON as an author, do it.
If you have a chance to go to GENCON as a guest? Well, now we get to where I talk about “tribe.”  For those of you who don’t know, I’m a huge role playing game fan.  (“Wait, wait…you dropped DnD references and names throughout An Unproven Concept.”)  Being around 75,000 other people who shared the same passion was amazing.  I spent most of the weekend talking to people with whom I didn’t have to explain phrases like, “Oh, so you’re a World War II buff as well?  I shall now make my persuasion roll with advantage…” (and yes, she bought the alternate history anthology).  Even better when you see familiar faces from the Kansas City area and do a mutual “Wait, what?  Why are you here?!”  Plus, there were cool books like this:

And a truly impressive charity set up: 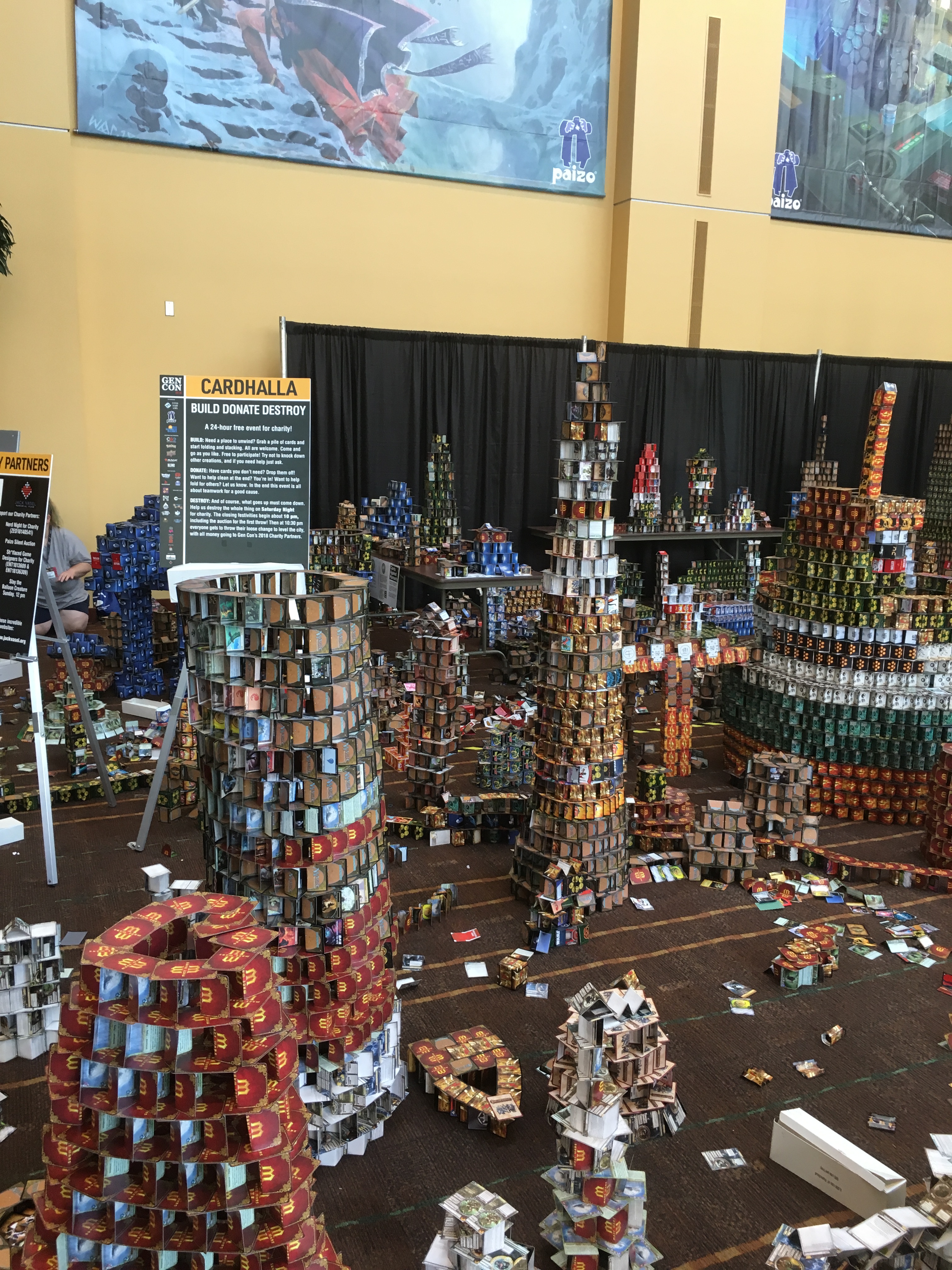 In addition, there’s Critical Role Live (if you get your tickets early enough):

I was in a theater with over 2,000 fellow crazies when this brought the house down:

Courtesy of Leigh 574
For those of you who don’t know who that is or why we were all ecstatic about a man in a pink suit on roller skates coming out with a headlight in his crotch, I can only point you here, then point you here, and say this has been one of the best stories I’ve ever consumed.
Finally, I got to see old friends after several years.  To include my friend Quiltoni (“Queen of the Quilts” as I’ve been known to call her) and her merry band of booth helpers.

(No, there’s not a quilter in there…we all forgot to take pics the whole weekend)

So to recap:  Go to GENCON for the sales, stay for the community.  It’ll probably be the best 4 days of your life, the people were awesome, and I have zero regrets about taking the plunge into Author’s Avenue (even with the spinning wheel of doom).  I don’t know if I’ll do it next year (I have my sights set on a couple of other shows that might eat the leave), but it was worth it this year.