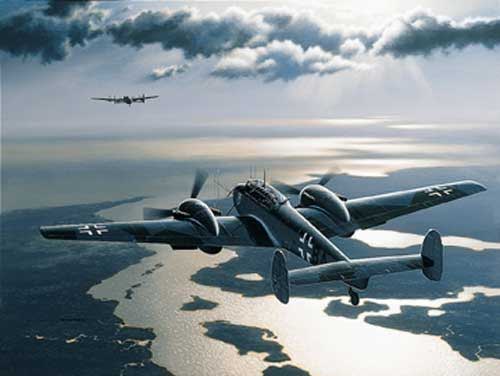 So, remember way back when I said I was going to do fighter history and bombing history separate?  Yeah, I refreshed my memory on bombing during World War I.
*insert yawn here*
I mean, it happened.  There were even a few times it was effective in the “we made a big mess” kind of way.  But compared to fighter combat, there’s not a whole lot of there, there.  So, I’m making a command decision and we’re just going to go with general air warfare from here on out.
I have no idea how many parts this is going to be.  Remember the Battle of Britain?  Remember us hitting the 2,000 word limit so quick I didn’t even get to talk about Czechs, Poles, and other foreign pilots?  .  Well, that’s probably going to happen again…so some things are going to get short shrift, as things don’t get really exciting until 1943.
“But wait a second!  You were just talking about the Battle of Britain, now suddenly we’re in 1943?  What the Hell happened in between?”
Look, I’m not saying there wasn’t important fighting.  I’m just saying that most of November 1940 through, oh, January 1943 in Western Europe consisted of RAF Fighter Command creating squadron and wing commander openings via ill-considered fighter sweeps.  Followed shortly by the United States, after Pearl Harbor, deciding they wanted to jump on that bandwagon with largely symbolic raids through most of 1942.  We’ll get to most of that fun in the next installment.
The sum effect of this on the war?  Well, it created a lot of  German aces…but not nearly as many as the Luftwaffe’s attack into Russia (Eastern Front is coming later in this series). It also provided convincing evidence that maaaaaaybe the Spitfire was not all that good of an escort fighter.  Oh, and that home field advantage was a real thing when you added radar (also known as, “Were you bloody idiots paying attention to what you did to the Luftwaffe during the Battle of Britain?!!”).  Finally, it drove home that there’s not a whole lot you can bomb in France when you’re fighting Germany.
However, I’m getting ahead of myself.  That little problem about German factories being in, surprisingly, Germany had the Brits good and vexed as 1940 became 1941.  First off, nothing like someone wailing on your country for several months during the day then continuing to do so at night to get the Vengeance Band warming up and looking for a lead singer.  Indeed, some guy named Arthur Harris, while watching London burn one night in 1941 from the roof of the Air Ministry one night, started quoting scripture about “sowing wind” and “reaping whirlwinds.”  Normally a bloke from Rhodesia muttering things from the Bible isn’t remarked upon by history.  (Spoiler alert: This guy becomes important to our story in about 500 words.)  In any case, Harris wasn’t alone, and as a matter of fact the RAF felt they had just the thing to get retribution: Bomber Command.
Now, some of you may be saying, in your best rendition of “The Bride’s”-voice: “And what, pray tell, is Bomber Command?”  Well, you can read the Wiki here, or go with the short hand explanation of Bomber Command as the manifestation of 1930s aerial warfare theory put into practical use.  In the 1930s, air planners assumed several things:

The British, having formed the first independent air force, proceeded to double down by forming the first independent command designed to attack based on these theories.  They then expended a great amount of research developing long-ranged, heavy bombers to equip it.  Unfortunately, as you may recall, I’ve spent two blog posts detailing how the war had not gone according to Douhet up to this point for either side.  The folks making the decision to bomb Germany lived through it in real time, and had practical experience from 1939-1941.
Despite this, the British still seriously tried to knock Germany out of the war via strategic bombardment once the Battle of Britain was truly over.
Operations started going poorly right from the beginning.  Funny thing about bombing a strange, blacked out country at night while under threat of immediate violent death: It tends to make you miss.  As in, the average British bomber crew was missing entire cities by over five miles.  Nor were they doing so maliciously–I mean, Cologne probably looks like Wiesbaden when you’ve got anti-aircraft artillery fire bursting around you and some crazy guy in a night fighters is looking to impress the local Fraulein by turning your bomber into a blazing comet.

“Bloody Hell, I think we just got that Kraut bastard a second date!”

It did not help that the Germans, like the RAF, quickly started figuring out things like interceptor control and ways to mount radar on twin-engined fighters.  Remember the Bf-110 squadrons and how they were sitting ducks during daylight?  Well, turned out it just needed someone to turn out the lights to really shine, as the large airframe and heavy armament made it an excellent night fighter.  Things started getting kind of bloody over Germany.  Even worse, folks like the British Army and Coastal Command started pointing out that it was kind of wasteful digging German irrigation ditches with 500-lb. bombs when there were plenty of other things those aircraft could be doing.

“You know, someday we’re going to have to start watching the skies.  Someday.”

Just as it seemed like Bomber Command was going to get sharply reduced, two things happened.  First, in typical government agency fashion, Bomber Command decided to “rebrand” itself.  Its leaders accepted that it was not going to win the war by attempting to encourage the union of a British ordnance with German machine tools in the middle of the night.  No, in typical gentlemanly fashion the RAF was going to merely “dehouse” Germany’s population in a humane fashion using rather potent high explosives followed by incendiaries.
*We’ll pause while those unfamiliar with this story wait for me to explain how one blows up civilian houses without blowing up civilians only to realize that I’d just type Coventry about 10,000 times.  In other words, this was all sophistry, the British sooooooo did not have any f*cks left to give*
The second thing that made this all work was that the Air Ministry put a fellow in charge of Bomber Command that they knew could get the job done.  Someone who would not blanche in the face of heavy losses, would merrily bomb Germany from Konigsberg to Cologne, and yet could subvert his inner Visigoth long enough to seem semi-sane on the newsreels or sit in the pew next to Allied senior officials. A God-fearing man, the chosen flag officer also had an amazing ability to quote all the good Hellfire and Damnation parts of the Old Testament at will.  Ladies and gentlemen, I present to you Sir Arthur “Bomber” / “Butch” Harris, the man who took over RAF Bomber Command in February 1942: 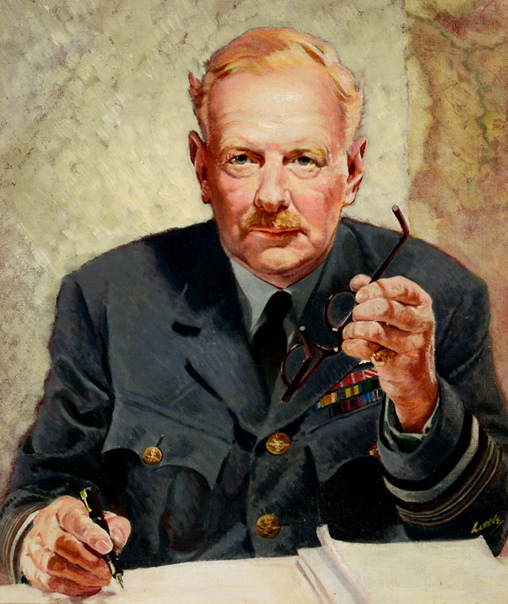 “Wait a second, JY.  This guy looks like someone’s genial grandfather.  You’re making him sound like some crazed lunatic.”
You’re right, he does look like someone’s elder relative who always has the sweets, doesn’t he?  But I assure you, behind that kind-looking exterior was a man who felt about Nazi Germany’s population about the way Mad Max felt about the man who murdered his family:
[youtube https://www.youtube.com/watch?v=N2x8RhadlpA&w=560&h=315]
I mean, technically Max didn’t set the guy on fire himself, right?  He was just “decarring” him.
When Harris took over, his command was equipped mainly with obsolescent twin-engine aircraft that did not carry much of a workable bomb load any appreciable distance.  His crews could not navigate, tended to crash a lot, and they had few feasible electronic aids to help them see through the darkness.  In short, your average bomber crew was just as dangerous to themselves as they were to the Germans.  As in, “rednecks with a fridge full of tannerite” dangerous to themselves.
Three months later, Bomber Command was doing things like launching 1,000-aircraft raids.  A couple months after that, it had replaced its obsolescent bombers with Handley Halifaxes, Short Stirlings and, the best of them all, Avro Lancasters. in large numbers.  In order to better find targets, the RAF not only developed better radio aids, but also fielded a Pathfinder force to better mark the targets.  Finally, in equipping their aircraft with ground mapping radar, Bomber Command proved serious about making sure the right Germans got bombed on any given night.
From the German perspective, the proverbial fecal matter was making sweet, sweet love to der lüfter as 1942 came to a close.  While the Jagdflieger were more than holding their own in daylight, all of the above meant things were getting a little out of hand at night.  Already tapped out fighting against the Soviets, dealing with the invasion of North Africa, and with the Battle of the Atlantic swinging like a pendulum, the last thing the Germans needed was to be dealing with a resurgent Bomber Command.
With this in mind, the Luftwaffe began to take things seriously after Operation Millenium and began shifting more resources to the Nachtjagdgeschwader.  In addition to upgraded Bf-110s, the Germans fielded the Ju-88C, which was basically an excellent day bomber with a nose full of cannons.  Realizing that the RAF had decided bombloads were more important than belly turrets, they also developed “Schräge Musik” weapons kits that allowed a Bf-110 or Ju-88 to fire upwards.

Schräge Musik, which loosely translated to “slanted music” in English, was the German slang for jazz.  However, as many a Lancaster crew could tell you, there was nothing smooth or mellow about two cannon dropping high explosive and armor piercing rounds upwards into a fully loaded bomb bay or unsealed fuel tanks:

“Which of you bastards radioed for a Duke Ellington session?!”

Still, despite all these innovations and the ability to occasionally inflict severe losses on Bomber Command raids, at best 1942 ended with the Reich Defense Forces and Bomber Command at a draw.  Which, given all the other crazy stuff that was going on for the Reich around that time, probably made Adolf Galland, now General of Fighters, breathe a sigh of relief.  Indeed, in my minds eye, I see him laying next to some beautiful actress, smoking a post-“sortie” cigar, and thinking:
Ja, things are bad.  I mean, my brothers keep getting whacked, the Russians are starting to figure out how to fly and shoot at the same time, and it’d be nice if the Fuhrer would stop declaring war on industrial nation after industrial nation.
*slow puff of cigar and pat of shapely behind off screen*
But hey, it’s not like anyone else is coming to the fight, right?  I mean, what kind of idiot would attempt to bomb heavily defended German targets after how bad we kicked the RAF’s ass in 1939?
*completely apocryphal, utterly non-historical camera cut to General Ira C. Eaker, commander of the United States Eighth Air Force, turning his head as if Adolf’s thoughts are projected into his mind*
“Hey Butch, hold a brother’s pint for a second.”
*theatrical rolling up of sleeves*
“I think some Nazi just inquired about the Uncle Sam Special…”
Tune In Next Time For “Around the Clock,” a.k.a., Can’t tell Sam’s boys a damn thing.”