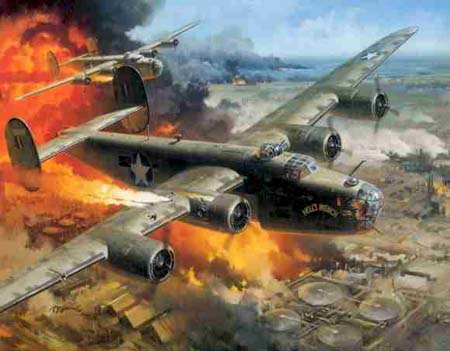 So remember when I said I had reading list?  Well, I can do even better than that–I have an entire historiographical paper about the Allied Bombing Campaign in World War II.  It’s a bit dated (I wrote it back in 2006), but the end notes and bibliography have more than enough things to get a person started.
Warning:  This is a paper.  So if you’re planning on reading it in one go, the little counter on the bottom tells me this thing is over 11,000 words long.  Plan accordingly.

Destruction From The Heavens:

The USAAF’s Campaign In General Histories

Under the Tonnage: The German Populace’s Experience

Nothing in this book should be taken as any form of revisionist apology for Nazism and its frightful atrocities, or Japanese militarism and its aggressions, even if the conclusion is that German and Japanese civilians suffered wrongs.  A mature [emphasis mine] perspective on the Second World War should by now enable us to distinguish between these two quite different points.[45]

Such histories form a large part of fourth part of the historiography, that of subject-specific histories.  On the Allied side, such histories tend to be myopic, sacrificing a greater understanding of the war’s strategic context in favor of a narrow examination of a particular organization’s experience in the air war.  The majority of these histories focus on the Eighth Air Force, with the two most common examples being the nearly identically-titled The Mighty Eighth: Units, Men, and Machines (A History of the US 8th Army Air Force) by British aviation author Roger A. Freeman and military historian Gerald Astor’s The Mighty Eighth: The Air War in Europe as Told by the Men Who Fought It.[75]  Although most of the World War II press and subsequent histories seem to support the subtitle of Astor’s work, the 15th Air Force was decisively engaged in attacking the southern portion of the Reich from November 1943.  Despite the importance of their attacks, especially those against Nazi Germany’s oil supply, there are no commonly available histories solely devoted to the 15th’s exploits.  Nor is this lack of representation unique to the 15th, as it occurs for most of the Eighth’s subordinate commands.  There are few widely published bomber group unit histories, reducing the men and machines that constituted the Eighth’s primary reason for being to relatively anonymity.  In contrast, the 56th, 4th, and 364th Fighter Groups alone are each the subject of at least one book, while the 8th’s myriad aces are the subject of numerous autobiographies and composite works.
This overrepresentation of fighter pilots skews their relative importance to the overall conduct of the American Bombing Campaign.  Similarly skewed is the importance of the B-17 Flying Fortress, as it is the airframe that is most commonly represented in print and pictures that discuss the 8th Air Force.  Martin Caidin’s Flying Forts, Jablonski’s Flying Fortress, and Freeman’s B-17 Fortress at War are but a small sample of the large number of books devoted to the Boeing bomber.[76]  The B-24 Liberator, on the other hand, has had few books written on it, with Stephen Ambrose’s The Wild Blue being the most recent.[77]  A similar situation, however, does not exist with regards to the American fighters, however, as each of the primary escort fighters (P-38, P-47, and P-51) each have a similar number of works devoted to their operational use.
The number of Jagdwaffe general histories is relatively small.  To date, there is only one comprehensive, English language history in existence, the rarity of which makes its acquisition fiscally prohibitive for libraries and private individuals alike.  Likewise, there are few in-depth unit histories that cover the entire operational life of a single Jagdwaffe unit from the beginning to the end of the Second World War.  Aviation author Donald L. Caldwell’s JG 26 is the best example of all these, being both extensively researched and well written, and the dearth of Luftwaffe war records and rapidly declining number of veterans makes it unlikely to be equaled.[78]  However, the Jagdwaffe’s chaotic personnel policies make this less of a historical gap than it would first appear.  Experten were regularly transferred between units due to their own injuries or to fill command positions left vacant by a fellow pilot’s relief, disablement, or death.  Units, in turn, were often detached for service on another front, resulting in some Jagdeschwader having subordinate Gruppen simultaneously located on all three major German war fronts.  Consequently, books on the Jagdwaffe, unlike the overwhelming majority of those on their Allied counterparts, are often forced to explain the larger strategic picture in order to avoid confusing readers.
Unfortunately, concentration on the Experten has led to the lionization of their primary mount, the Bf-109, at the expense of the Fw-190 and its pilots.  The majority of these books also fail to mention the Bf-109’s creeping obsolescence.  In addition, there remains little information on the various anonymous pilots that composed the bulk of the Jagdwaffe.  Although large numbers of these pilots did not survive their first missions, there is likely a significant number of them whose scores would have made them quite famous had they been born in one of the Allied nations.  Lastly, there are few sources which detail the training methodology, pilot equipment, or daily operations of the Jagdwaffe as a whole.  The early success, decline, and ultimate failure of the Luftwaffe in its entirety is clearly connected to the fate of its fighter arm, and it is a subject that deserves further study.

Such further study is outside the scope of this paper, which has focused on the available rather than potential historiography and its gaps.  As the examination has shown, the USAAF campaign can be defined in many ways.  Those works sympathetic to its conduct portray it as a limited success whose achievements far outweigh the collateral damage it caused.  Its opponents decry it as a clear violation of just war theory that was brought about by various base desires for revenge, an independent Air Force, and/or cold-blooded indifference to the civilians it fell upon or the young men forced to carry it out.  Such a debate will fruitlessly continue until one or more of the faults currently inherent in the historiography is addressed.  Historians from both sides must agree on a common degree of metrics, as a discussion of the relative merits inherent in oranges’ and apples’ can only be resolved on personal bias.  Although the complete elimination of such bias is, of course, impossible, by relying on these established measurements much of the current moral reproach and polemic speech would be removed from what should be dispassionate analysis.  In addition, such statistics would allow the examination of both defenders and attackers and allow for an all-encompassing examination of the campaign’s effect on the Wermacht’s conduct of the war, with emphasis on the Luftwaffe in general and Jagdwaffe in particular.  Finally, all of these steps would allow professional historians from both sides to actually hear and digest opposing viewpoints, thus allowing for a greater understanding of the Allied Bombing Campaign and Second World War as a whole.  With active participants disappearing at prodigious rates, the importance of accomplishing this has never been greater even as the time to do so grows ever shorter.

BIBLIOGRAPHY
(Books in Bold were not used in text preparation but are included for information purposes.)
Ambrose, Stephen E.. The Wild Blue. New York: Simon and Schuster, 2001.